In the beginning, the world was not as we know it now. It was a water world inhabited only by animals and creatures of the air who could survive without land.

Up above, the Sky World was quite different. Human-type beings lived there with infinite types of plants and animals to enjoy.

In the Sky World, there was a Tree of Life that was very special to the people of the Sky World. They knew that it grew at the entrance to the world below and forbade anyone to tamper with the Tree. One woman who was soon to give birth was curious about the Tree and convinced her brother to uproot the Tree.

Beneath the Tree was a great hole. The woman peered from the edge into the hole and suddenly fell off the edge. As she was falling she grasped at the edge and clutched in her hand some of the earth from the Sky World. As she fell, the birds of the world below were disturbed and alerted to her distress. The birds responded and gathered a great many of their kind to break her fall and cradle her to the back of a great sea turtle. The creatures of the water believed that she needed land to live on, so they set about to collect some for her. They dove to the great depths of the world's oceans to gather earth to make her a place to live. Many of the animals tried to gather the earth from the ocean floor, only the muskrat was successful. With only a small bit of earth brought onto turtle's back from his small paws, Turtle Island began to grow. 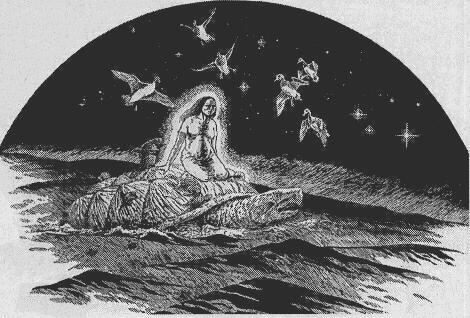 The Sky Woman soon gave birth to a daughter on Turtle Island.

The daughter grew fast. There were no man-beings on Turtle Island, but a being known as the West Wind married the daughter of Sky Woman.

Soon the daughter of Sky Woman gave birth to Twins. One was born the natural way, and he was called the Right-Handed Twin. The other was born in a way that caused the death of the mother. He was called the Left-Handed Twin. When their mother died, their grandmother, Sky Woman, placed the fistful of earth that she grasped from the edge of the Sky World, and placed it on her daughter's grave. The earth carried special seeds from the Sky World that were nourished by the earth over her daughter. So from the body of her daughter came the Sacred Tobacco, Strawberry and Sweetgrass. We call these Kionhekwa. The Life Givers.

Their Grandmother, Sky Woman, now came to the end of her life. When she died, the Twins fought over her body and pulled it apart, throwing her head into the sky. As part of the Sky World, there her head remained to shine upon the world as Grandmother Moon. The Twins could not live together without fighting. They agreed to dwell in different realms of the earth. The Right-Handed Twin continued to live in the daylight and the Left-Handed Twin became a dweller of the night. Both of them continue their special duties to their Mother the Earth.